Wives of Presidents play certain crucial roles in the period of their husbands’ presidency is common around the world.

There are associations of First Ladies which meet occasionally to deliberate on matters of common concern.

She was a Coptic Egyptian and the First Lady and the wife of the Osagyefo Dr. Kwame Nkrumah.

Fathia Nkrumah was born and brought up in Zeitoun. Fathia was raised by her mother after her husband’s death.

After completing her secondary education, where she studied French. She worked as a teacher at her school in Zeitoun.

As teaching did not appeal to her, she took a job in a bank. Frederick, an American journalist, who published her book in 1967, said Nkrumah sent his friend, Alhaji Saleh Said Sinare, who was one of the first Ghanaian Muslims to study in Egypt, to find him a Christian wife from Egypt, and Fathia was one of the final five women chosen. 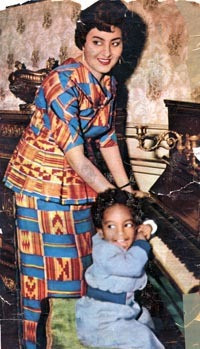 At that stage, Kwame Nkrumah proposed to marry her. Her mother was reluctant to see another of her children marry a foreigner and quit the country, as Fathia’s brother had left Egypt with his English wife.

Fathia explained that Nkrumah was an anti-colonial hero, like Nasser, yet her mother refused to speak to her or bless the marriage.

Nkrumah married Fathia at Christianborg Castle, Accra on the evening of the 1957 New Year’s Eve upon her arrival in Ghana.

She was admitted to a three-year midwifery-training course at Korle-Bu Hospital and graduated among the first hospital-trained midwives.

Busia became personally responsible for the building and improving midwifery clinics around the country and fought hard to bring down the high infant mortality rate, as First Lady of Ghana. 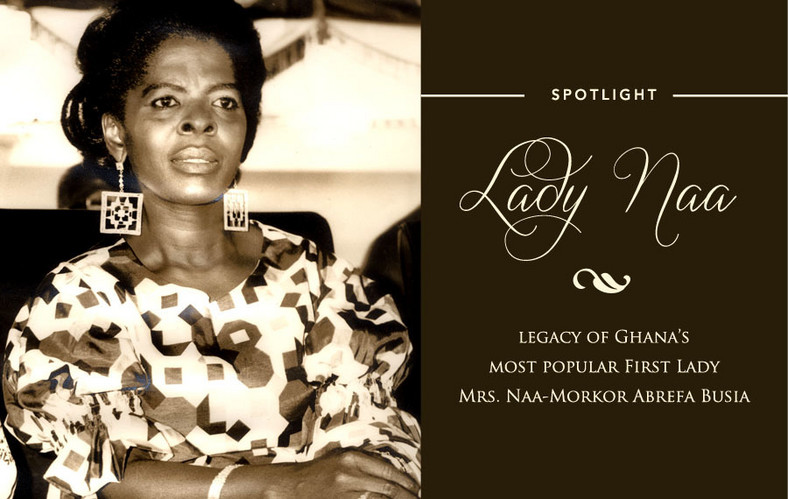 Her husband, Prof. Busia sailed to England to become the first black African to attend University College, Oxford, he remembered his former pupil, Naa Morkor and sent for her.

Shortly after their marriage, they returned from England to Ghana, where Prof. Busia became the first African professor at the University of Legon.

Life as the wife of the Prime Minister was demanding. Naa Morkor was by nature a woman who treasured the tranquility of private home life, yet she continued to exceed public duty with characteristic grace.

Mrs Dora Fulera Limann was born on November 8. 1945 and recently celebrated her 70th anniversary with her children and grandchildren. She married Dr Hilla Limann who assumed office as president on September 24, 1979 having had power transferred to him by Flt Lt. Jerry John Rawlings then chairman of a junta, Armed Forces Revolutionary Council (AFRC). 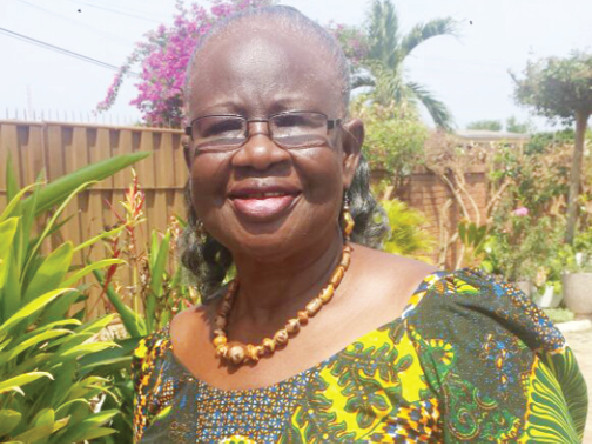 For Nana Konadu Agyeman-Rawlings, her husband Jerry John Rawlings was Head of State and President for nineteen (19) years.

She attended Ghana International School. Later she moved to Achimota School, where she met her beloved, Rawlings.

Nana Konadu got married to Rawlings in 1977. They had their first child, Zanetor in 1978.

Two other daughters and a son followed later; Yaa Asantewaa, Amina and Kimathi. 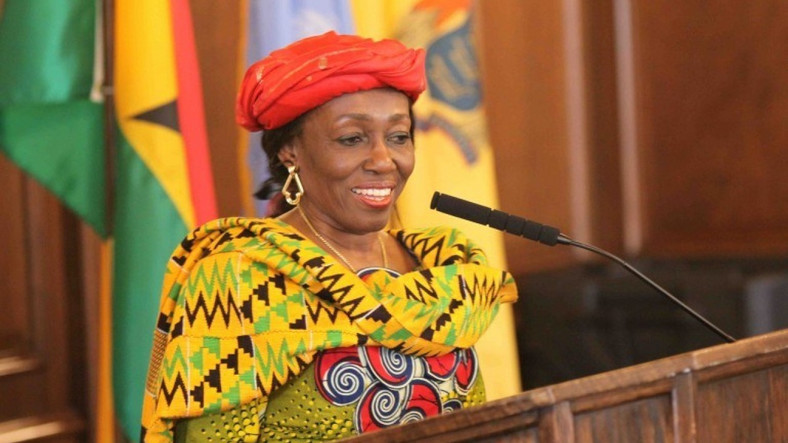 She started her education at the Catholic Convent, OLA, at Keta in the Volta Region and ater went to London, where she was educated as a Registered General Nurse, in the Southern Hospital Group of Nursing. Edinburgh, Scotland.

She has five children with John Kufuor, former president of Ghana; J. Addo Kufuor, Nana Ama Gyamfi, Saah Kufuor, Agyekum Kufuor and Owusu Afriyie Kufuor.[6] She is a mother of five, and a grandmother of eight. 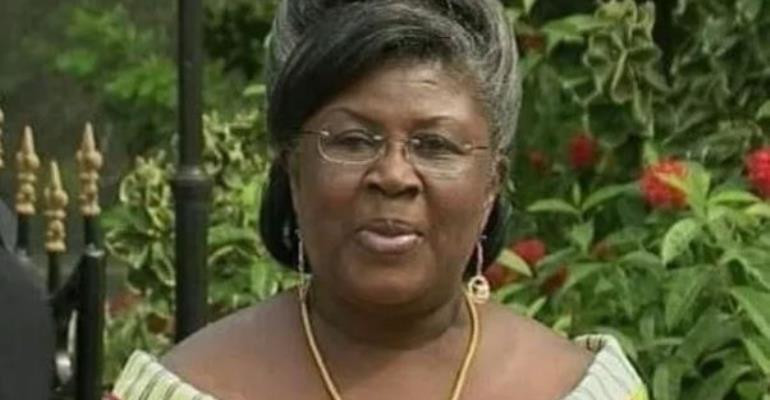 Not much was heard of her. Apart from a few news items of her making donations here and there. 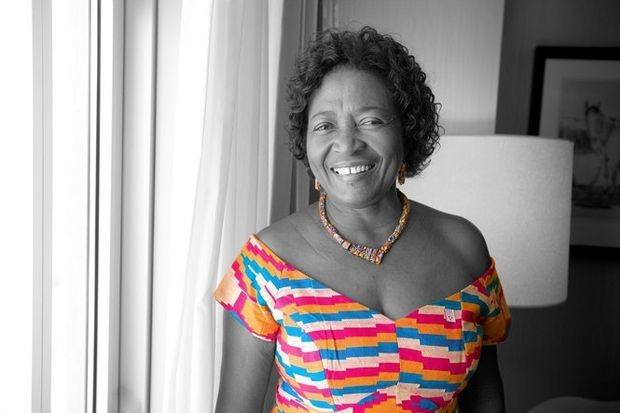 The project aimed at encouraging and inspiring students in SHSs across the country to lead moral and responsible lifestyles for national development.

Lordina Mahama, wife of former President John Mahama from 2012-2017 would pass as perhaps the most visible after Nana Konadu Agyeman-Rawlings.

Lordina is from Jema-Ampoma in the Nkoranza District, located in the Brong-Ahafo Region.

She was a student at Flair Catering Services and received a four-year college education in Hospitality Management at the Ghana Institute of Management and Public Administration (GIMPA).

She studied for an MA in Governance and Leadership at GIMPA.

She was First Lady from 2012 to 2017 and President and Founder of the Lordina Foundation.

The Foundation like others before her is an NGO dedicated to the welfare of the underprivileged in Ghana, particularly Orphans and Vulnerable Children (OVC) as well as Women.

Rebecca Akufo-Addo is the current First Lady of Ghana and the wife of President Nana Addo Dankwa Akufo-Addo.

She attended the primary department of Achimota School. She is an old student of Wesley Grammar School in Dansoman.

She worked at the Merchant Bank in Ghana and later relocated to United Kingdom. She then worked as a legal secretary for Clifford Chance/Ashurst Morris Crisp all multinational law firms in the United Kingdom. 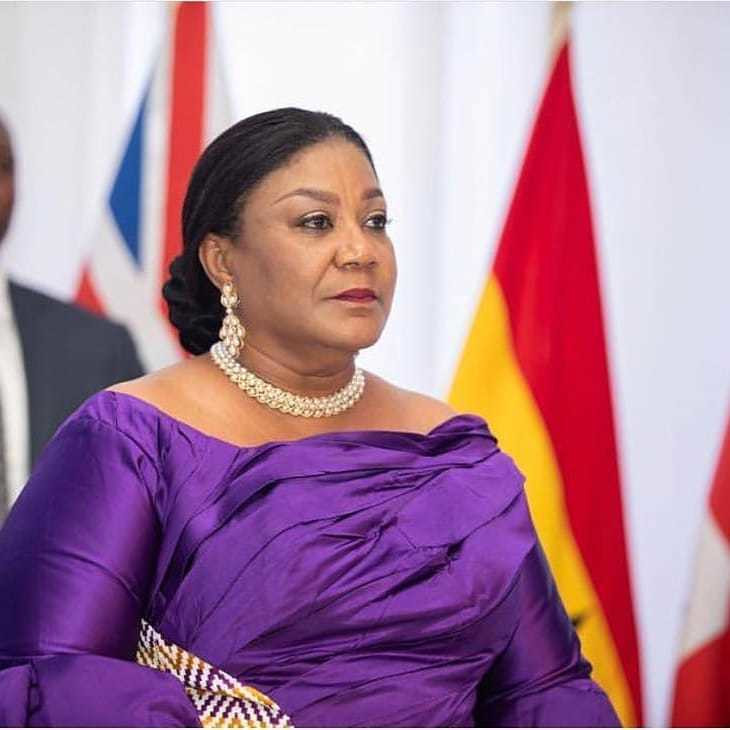 Rebecca and Nana Addo Dankwa Akufo-Addo have been married for 22 years and in 2017 they celebrated their 20th Anniversary. They have five daughters and five grandchildren.

Students To Be Promoted Next Academic Year Without Assessment – GES

PZ Cussons Donates GHS 50,000 Worth Of Products & Hand Washing Stations To The Underprivileged

Ministry of Education outlines guidelines for schools reopening amid COVID-19